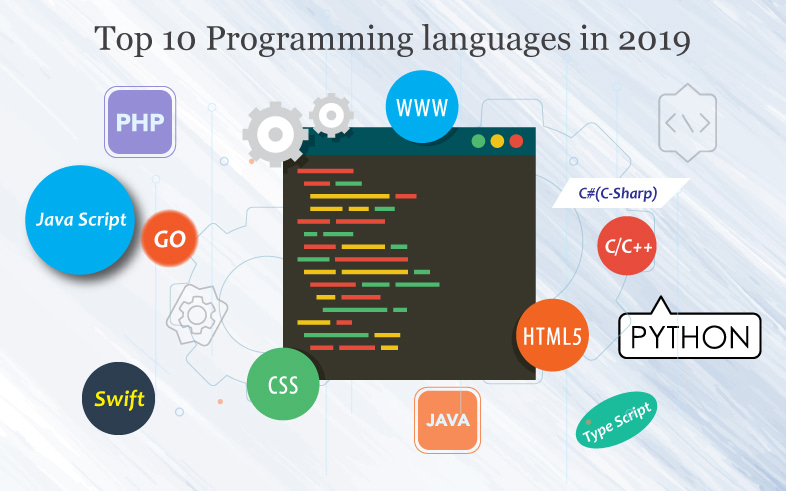 According to Stack Overflow Survey 2018 Developers Survey, JavaScript is one of the most popular programming languages. Most of the developers choose this language for interactive front-end applications as well as the back-end development and make transition from one platform to another platform such as web to mobile. For the most part, JavaScript interpret and acts an important role in front-end-development. It can be used in on server-side through Node.js as well. Also it provides a simple method to create interactive well web pages. Its compatibility with all the browsers and flexibility with the built-in syntax/ syntax it holds makes itself the most popular programming language in 2019.

C/C++ is the backbone of all the programming languages. It helps to get intense knowledge about how software application works. Operating systems, file systems etc all these low-level systems are written in C/C++. Standard Template Library- STL, is a library function that provides various data structures , arithmetic operations and algorithms in C/C++. Due to its high-end performance, reliability and variety of context, it is still very popular programming language. For a system level programmer C/C++ is the language to learn.

Python is one of the most well-liked high level programming language which is comprehend and easy to use and deploy to develop web applications. Python is flexible and powerful because of its variety of applications. Some popular web applications like Youtube, Intstagram, Pinterest etc are built in Python and some web development framework such as Django, Pyramid etc are based on Python. For the beginner developers it is a good option to learn Python.

TypeScript is an open-source programming language designed to develop extensive level of JavaScript applications. TypeScript use to develop hybrid mobile applications and it is a good preference for front-end and back-end development also. This programming language also use to design neural networks and to build architect cloud solutions. A range of reputed brands like Google and others use TypeScript for front end development framework.

However, PHP is in front of a hard competition with Python and JavaScript, a huge number of PHP developers still is in demand as a backend developer. Additionally frameworks like Drupal and Laravel are remarkable, and developers prefer to use these frameworks to create scalable and strong apps. To create dynamic web page contents and images on websites, PHP is strong preference to the web developers, also a smart language for WordPress and CMS(Content Management System).

Another top web programming language listed this year is GO, also known as Golang developed by Google. GO is a trouble-free programming language like Python, as well as resourceful like C++, to write simultaneous programs. Popular brands such as Google, Netflix, Silicon Valley and others have chosen this language for its excellent support for multi-threading , syntax simplicity and faster compilation.

Swift is another popular programming language influenced by Python and Ruby had been developed by Apple Inc and released in 2014 which is relatively new programming language. Swift is hardly desired to develop native iOS or Mac OS applications as iOS –based devices are even more popular than Android devices.

In a contrast of Objective –C, Swift entail fewer code and it is more secure and faster programming language. Also Swift is easy to read and debug.

Microsoft developed a general purpose programming language in 2000 and named it C#, which is broadly used for desktop applications, back-end programming, developing games such as VR, 2D, 3D and Window mobile phone applications. It is easier for beginners to learn C-Sharp as it has a variety of features and can be compared to C++ for its steady and logical code.

According to Stack OverFlow survey 2018, the second most required and popular programming language is Kotlin. This language is designed by JetBrains, which is a platform independent language for JVM. In the present day, kotlin can be used roughly everywhere such as android apps, server-side development with no limitations. Google declared in 2017 that Kotlin is the official programming language for android apps development as android developer prefers to work with it. In addition, kotlin works with all accessible libraries and frameworks in Java, and at the same time it runs with same level of performance.

What is accounting software and why is it needed?

Got any queries regarding your idea on how to build or what might cost you to build your desired website or app. Don't hesitate to contact us here so that you can get a proper & reasonable quote from us.